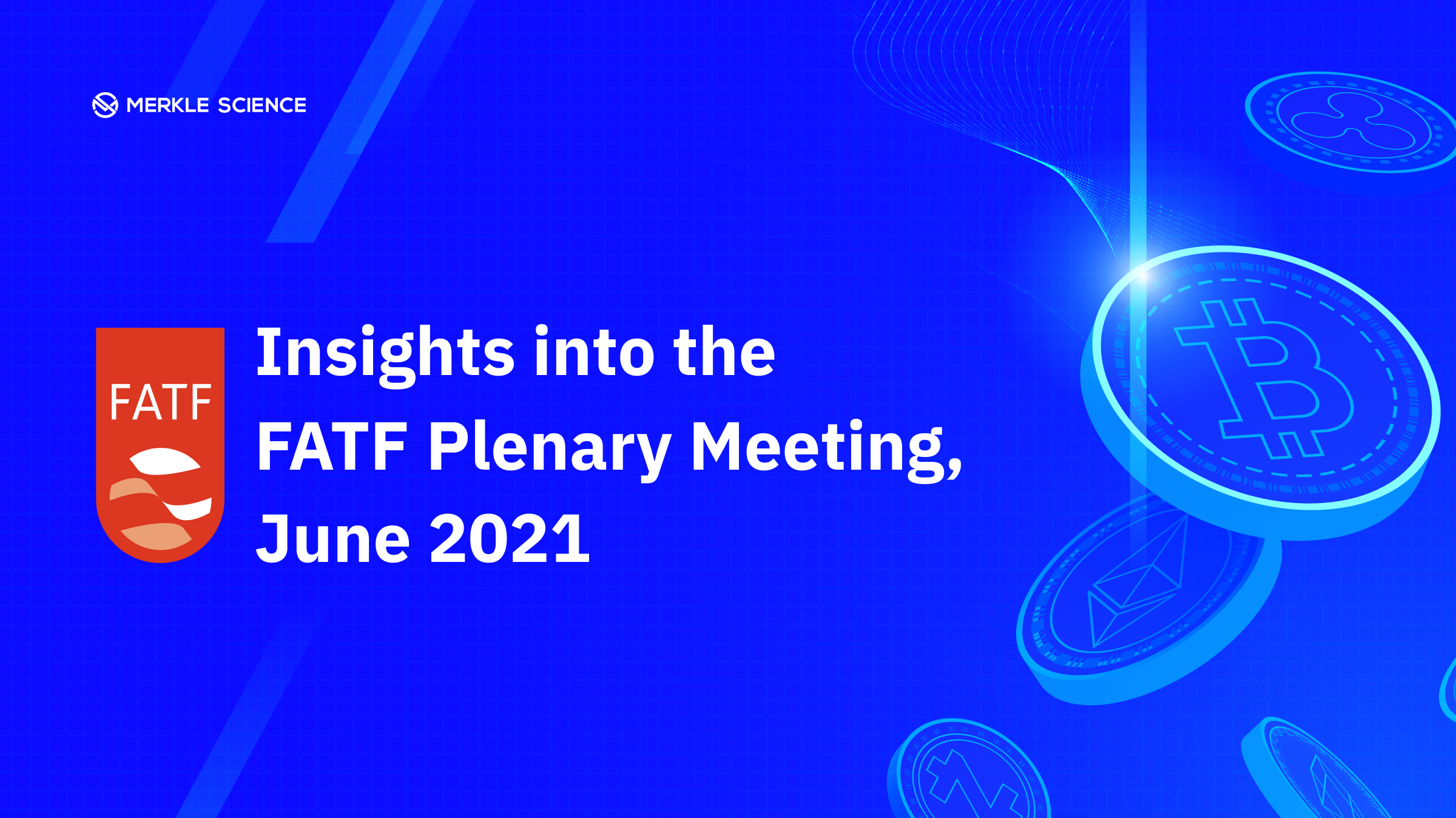 The Financial Action Task Force (FATF) held its fourth Plenary under the German Presidency of Dr. Marcus Pleyer between 21-25 June 2021. In the plenary meeting, the delegates took steps towards finalizing regulatory reports and guidance on key areas affecting the Virtual Asset Service Providers (VASPs). These areas include technological innovation, implementation of the travel rule, and asset recovery amongst others.

The FATF in its official release reminded the member states that while it is important for them to rebuild their economies amid the continuing Covid-19 pandemic, they must not forget to fully and effectively implement the risk-based FATF standards. The FATF noted that robust implementation of these measures is of primary importance in order to ensure that criminals and terrorists do not find new and emerging loopholes to exploit.

Below are Merkle Science’s key takeaways that we believe crypto asset businesses need to pay attention to.

In the plenary session, the FATF announced that it has completed a second 12-month review of the progress made by its member nations in the implementation of revised standards on VAs and VASPs. The FATF noted that many jurisdictions have made significant progress in implementing the revisions finalized in 2019. In fact, 58 out of 128 reporting nations self-reported the successful implementation of the revised FATF standards. However, this number includes six nations that have banned crypto exchanges outright from operating on their territories.

One of the key concerns of the FATF might be the lack of consensus amongst the different jurisdictions and industry players regarding the best way to comply with the Travel Rule. The Travel Rule obligates the VASPs to transmit originator and beneficiary information between one another during transactions over $1000 [FATF]. However, in the Second Twelve Month Review Report on Virtual Assets and Virtual Asset Service Providers, the FATF observed that a few jurisdictions had deviated from the transaction threshold guidance For example, in May 2019, FinCEN placed the threshold for customer due diligence (CDD) at $3,000 and proposed a caveat in October 2020 that the threshold for recording keeping was reduced to $250 for international transactions.

While the FATF, in the plenary meeting, accepted that the private sector has made progress in developing technological solutions to enable implementation of the Travel Rule, it also conceded that “a majority of jurisdictions have not yet implemented the FATF’s requirements.” The FATF also pointed out that these implementation gaps indicate a lack of uniform global standards aimed at preventing the misuse of VASPs for money laundering or terrorist financing. Further, the FATF also noted, “lack of regulation or implementation of regulation in jurisdictions can enable continued misuse of virtual assets through jurisdictional arbitrage.” Therefore, the FATF urged all the jurisdictions to implement revised FATF Standards, as quickly as possible.

The plenary also agreed to finalize the FATF’s revised guidance on Virtual A and VASPs in October 2021. As per the FATF, the main purpose of the guidance is to assist jurisdictions and private sectors in the implementation of FATF’s revised standards.

In the crypto industry, many players welcomed this news. U.S.-based Blockchain Association even called this delay a small win. This delay may have been triggered due to the overwhelming feedback received by the FATF from the key stakeholders with respect to the expansion in the scope of the definition of VAs and VASPs to accommodate DeFi, adoption of new risk mitigation measures applicable to P2P transactions and permitting jurisdictions that uncomfortable with noncustodial wallets to ban exchanges that permit their use in P2P transaction.

In October 2020, the FATF revised its Standards (R.1 and INR.1) to require countries, financial institutions, and designated non-financial businesses and professions (DNFBPs) to identify, assess, understand and mitigate their proliferation financing risks. The FATF has updated the Interpretive Note to Rec.15 to clarify that the new obligations on proliferation financing risk assessment and mitigation also apply to VASPs.

Use of Innovative Tech Solutions Key to Combating ML/FT

The FATF shed light on the importance of using novel innovative technological solutions while implementing regulations aimed at reinforcing the effectiveness of AML/CFT measures. The FATF stated that “new technologies can improve the speed, quality and efficiency of measures to combat money laundering and terrorist financing. They can help financial institutions and supervisors assess these risks in ways that are more accurate, timely and comprehensive.” The FATF finalized two reports as part of its project to explore the challenges and opportunities of technological innovation to make anti-money laundering and counter-terrorist financing efforts more effective. The reports will be published on July 1, 2021.

Lastly, The FATF official release also delved into other important issues such as the need to improve asset recovery measures; the addition of ‘Blockchain Island’ Malta, Haiti, Philippines, and South Sudan to and removal of Ghana from the FATF “grey list”; finalizing the report on ethnically and racially motivated terrorism financing, and strengthening FATF’s standard on beneficial ownership.

Once again, the FATF specifically highlighted the need of using technology-based solutions for transaction monitoring and enhanced due diligence to combat AML/CFT crimes. Merkle Science’s highly customizable and easy-to-use platform provides VASPs with 360-degree compliance support. Our predictive cryptocurrency risk and intelligence platform set the standard for the next generation of financial safeguards and criminal detection. Merkle Science proprietary Behavioral Rule Engine allows users to tailor the tool according to VASP’s own risk policies based on the FATF standards so that businesses may stay ahead of emerging illicit activities and fulfil their local compliance obligations.