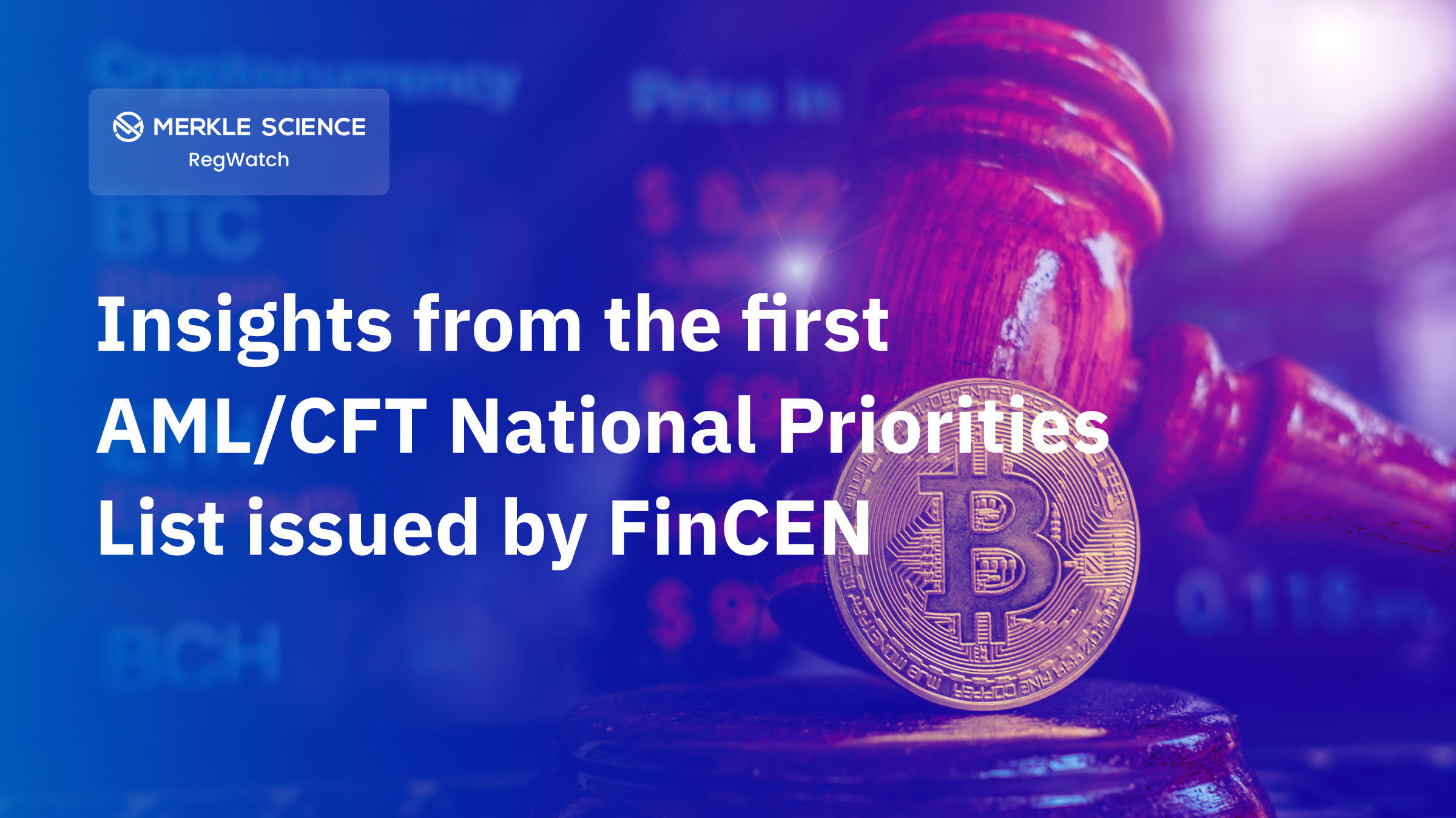 The United States Financial Crime Enforcement Network (FinCEN) issued its first government-wide list of priorities for Anti Money Laundering and Countering the Financing of Terrorism National Priorities (Priority List) on 30 June 2021. The Priority List coupled with the Department of the Treasury’s Illicit Finance Strategy 2020 and National Risk Assessment Priority List 2018, aims to help the covered institutions assess their risks, tailor their AML program and prioritize their resources in line with the key AML/CFT threats identified by the FinCEN. As per FinCEN, covered institutions are those financial institutions that are required by the Bank Secrecy Act (BSA) to maintain an AML Program. Covered Institutions include both banking institutions and non-financial banking institutions such as mutual funds, banks without a Federal functional regulator, money service businesses (MSBs) amongst others.

As per the FinCEN official press release, the Priority List identifies and describes the most significant AML/CFT threats currently faced by the United States, which include: corruption, cybercrime, domestic and international terrorist financing, fraud, transnational criminal organizations, drug trafficking organizations, human trafficking and human smuggling, and proliferation financing. The FinCEN also announced that it will issue additional regulations later this year as required by the Anti Money Laundering Act 2020. These regulations will provide more specific guidance to covered institutions so that they can “review and incorporate, as appropriate, each Priority based on the institution’s broader risk-based program.”

Within the section ‘Cybercrime, including relevant Cybersecurity and Virtual Currency Considerations’, FinCEN notes that the Department of Treasury is particularly concerned about “cyber-enabled financial crime, ransomware attacks, and the misuse of virtual assets that exploits and undermines their innovative potential, including through laundering of illicit proceeds.”

Further, FinCEN also pointed out that Convertible Virtual Currencies (FinCEN’s term for cryptocurrencies) have become “currency of preference in a wide variety of online illicit activities.” This was, no doubt, spurred by the recent wave of crypto-related ransomware attacks, such as the Colonial Pipeline ransomware attack. In fact, FinCEN specifically stated, “ransomware is a particularly acute concern, as criminals increasingly use sophisticated attacks to target various sectors, including government, finance, education, energy, and health care.”

The FinCEN added that cryptocurrencies are often used to layer transactions in order to hide the origin of money derived from illicit activities. Criminals often leverage tools such as mixers and tumblers in order to break the connection between the sender address and the receiver address. FinCEN recommends that covered institutions should focus on identifying and reporting suspicious AML/CFT activities as per the provisions of FinCEN Advisory 2019

Regulations of Bank Secrecy Act to be Updated

Along with the Priority Lists, the Federal Banking Agencies (FBAs), which include the Federal Reserve Board, the FDIC, FinCEN, the National Credit Union Administration, the Office of the Comptroller of Currency, State Bank and Credit Union Regulators, issued an interagency statement to provide financial institutions with additional clarity regarding the effects of the AML/CFT priorities. According to the statement, the FBAs plan to revise BSA regulations to address “how the AML/CFT Priorities will be incorporated into banks’ BSA requirements.”The FBAs also clarified that the newly published AML/CFT priorities will not take effect until the effective date of final updated BSA regulations.

Lastly, FinCEN issued related statements to both financial and non-bank financial institutions, offering them key advice stating that “in preparation for any new requirements when those final rules are published, covered institutions may wish to start considering how they will incorporate the AML/CFT Priorities into their risk-based AML programs, such as by assessing the potential related risks associated with the products and services they offer, the customers they serve, and the geographic areas in which they operations.”