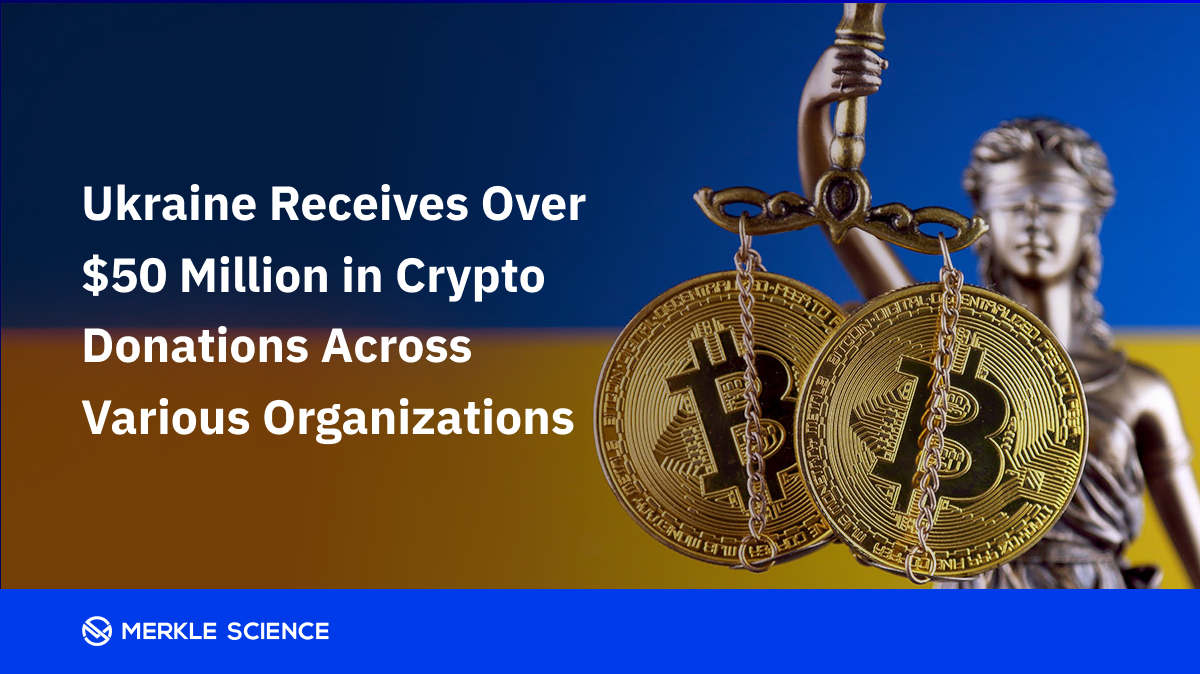 New amongst the top 5 organizations receiving donations is Unchain Ukraine was launched on February 25, 2022. Unchain Ukraine is a global crypto fund-raising campaign created by blockchain activists to support NGOs such as Voices of Children, Vostok SOS, Project CURE, International Medical Corps, and the Polish Center for International Aid. So far, it has received support from various crypto and DeFi companies such as Polygon, Solana, Yearn. Finance, NEAR Protocol, and Celo amongst others.

Organizations that have received the most donations (in USD):

Merkle Science is continuously monitoring the situation and is tracking crypto donations made to Ukraine on an ongoing basis. We have created a special dashboard that is dedicated to analyzing the donations. For easier understanding and clarity, we have bifurcated the donations based on cryptocurrencies donated and entities receiving donations.

According to our on-chain data, the organizations have received over $18 million in ETH, $16 million in BTC, and $6 million in BNB and BEP. Interestingly, more donations are being made using ETH, DOT, and BNB, as the transactions on these networks are faster and cheaper in comparison to the Bitcoin network.

Amidst the Russian attacks on Kyiv and cyberattacks against Ukraine’s banking network, several crowdfunding efforts have cropped up in support of Ukrainian efforts, including crowdfunding directly in support of the Ukrainian army as well as various non-profit organizations. So far, nearly over $36 million ($36.3 million as of March 1) in crypto has been donated.

Merkle Science identified 13 crypto addresses requesting donations from Ukrainian supporters. Out of the 13 addresses, six are Bitcoin addresses, five are Ethereum addresses, one is a BNB Chain address, and one is a Litecoin address.

Figure 1. Cryptocurrency donations received by organization as of March 1

As a part of its crowdfunding efforts, Ukrainian officials are directly asking for crypto donations. The official Twitter account of the Ukrainian government on Saturday posted addresses for two crypto wallets: one accepting BTC and the other taking ETH and USDT.

Figure 2: Breakdown of ERC-20 tokens sent as donations to A2

B. The Return Alive Foundation

The Return Alive Foundation raises funds to support the Ukrainian forces with supplies, equipment, and training and to generally strengthen the country’s defence capabilities. It also operates a news source that tries to stop the flow of propaganda and disinformation.

BTC address bc1qkd5az2ml7dk5j5h672yhxmhmxe9tuf97j39fm6 (labelled as wallet B1) was taken from Savelife, a website backed by the foundation.

C. Centre for Research of Signs of Crimes Against the National Security of Ukraine

Centre for Research of Signs of Crimes Against the National Security of Ukraine (Myrotvorets) is a website that researches and publishes personal information of people whose actions have the signs of crime against the national security of Ukraine, peace, human security, and the international law.

BTC address 16isQMNsnVn15kbJwzUHXPgiGKvrj7EFQ (labelled as C1) was obtained from the organization’s official website. To date, C1 has had 59 incoming transactions and 17 outgoing transactions. Approximately 80% of the incoming funds worth around $214,554 were received in August and September 2021, when the address was most actively receiving funds. Roughly, 73% of the outgoing funds, amounting to $143,143 were withdrawn in November 2021 when the address was most actively withdrawing funds.

The Cyber Partisans is a Belarusian decentralized anonymous hacktivist collective, which emerged in September 2020. The hacktivists, in their official Twitter account, have stated, that they will be working with volunteer hackers to help Ukraine’s military fight back in the cyber domain. According to their Twitter account, the hackers are accepting donations in the following Bitcoin address: bc1qw4yqlzgjxnl9dtzchxj7nkjdlw6uz2gdkp0679 (labelled as wallet D1).

The Ukrainian Cyber Alliance is a collective of Ukrainian hacktivists. The alliance emerged from the collaboration merges of popular cyber activist groups FalconsFlame, Trinity, RUH8, and cyber activists from the Cyberhunt group. The group’s main objective is to counter Russian aggression in Ukraine.

BTC wallet address 19fMSv8ULjoBR7UNgNGuTrqoQmwiZEa63v (labelled as wallet E1) was obtained from the Ukrainian Cyber Alliance’s official Facebook page. In total there have been 17 incoming transactions and 9 outgoing transactions out of E1. The earliest transaction was recorded on January 29, 2020, while the most recent one is recorded on February 28, 2022.

Additionally, E1 had an 8% direct outgoing exposure, whereby funds were sent out directly using the payment gateway service CoinPayment. Around 11% of the outgoing funds were indirectly sent to prominent exchanges.