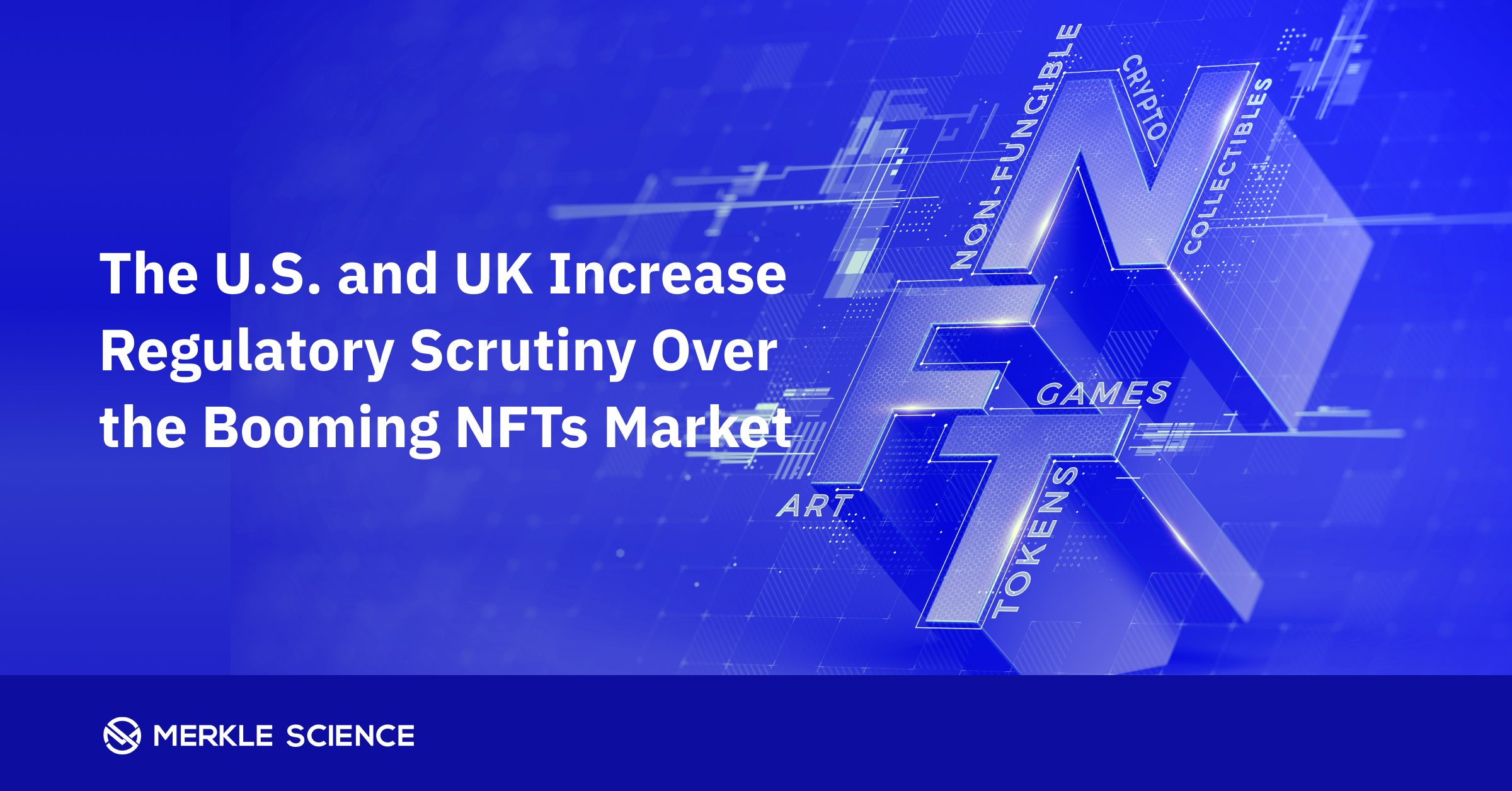 The NFTs market has grown exponentially over the past year. Reportedly, the booming NFTs market generated over $23 billion in trading volume in 2021, compared to just $ 94.9 million in 2020. Further, greater commercial viability and an increase in the trading volumes have resulted in increased risk for fraudulent activities such as AML/CFT risks, tax frauds, and copyright violations. The risks associated with NFTs have captured the attention of regulators all around the globe. On February 4, 2022, the U.S. Department of Treasury published a report, warning the investors that NFTs may, potentially, become a tool for money laundering in the high-value art market. Shortly after that, on February 14, 2022, BBC reported that Her Majesty’s Revenue and Customs (HMRC), the chief tax authority in the United Kingdom, has seized three NFTs as part of a probe into a suspected value-added tax (VAT) fraud case involving 250 alleged fake companies.

The U.S. Department of Treasury warns that NFTS could be linked to money laundering

In line with the requirements of the Anti-Money Laundering Act of 2020, the U.S. Department of Treasury published a study on the facilitation of AML/CFT through art trade. Though the study’s overall conclusion was that “the art market should not be an immediate focus for the imposition of comprehensive AML/CFT requirements,” the study also highlighted the explosive growth of the market for NFTs as an area of potential AML risks.

According to the study, NFTs are digital tokens on a blockchain that represent ownership of images, videos, audio files, and other forms of media or ownership of physical or digital property. The U.S. Department of Treasury noted that since NFTs are on a blockchain they are publicly verifiable, auditable, and digitally unique; however unlike virtual assets that have fluctuating exchange rates, the value of each NFT, in theory, depends on the individual exchange between a buyer and seller.

The study further clarified that those NFTs that are used for payment or investment purposes may fall under the FATF’ definition of a virtual asset, and, hence, the service providers of these NFTs could meet the FATF definition of a virtual asset service providers (VASPs). Similarly,  platforms that support the sale and purchase of NFTs, as well as virtual mediums like metaverses can be regulated as money services businesses (MSBs) under the Financial Crimes Enforcement Network (FinCEN) regulations. These service providers, therefore,  have to be subjected to existing KYC/AML regulations. To this end, the study states  that “to understand the application of AML/CFT obligations, it is important to consider the nature of the business dealing in NFTs and their function in practice as well as the facts and circumstances of the platform or other person doing business.”

The U.S. Department of Treasury particularly emphasized that NFTs could be utilized in self-laundering.  Self laundering is a process in which users spend money on an NFT they already own to conceal transaction traces on the blockchain. Under this process, the criminals first purchase an NFT using illicit funds. They then continue to transact with themselves to create records of sales on the blockchain. Post this,  the NFTs will be sold to an individual who will compensate the criminal with clean funds not tied to the prior crime.

Further, peer-to-peer transactions of NFTs in the absence of any intermediaries, with or without any record on a public ledger may also give rise to AML/CFT concerns. The report observed that “the ability to transfer some NFTs via the internet without concern for geographic distance and across borders nearly instantaneously makes digital art susceptible to exploitation by those seeking to launder illicit proceeds of crime because the movement of value can be accomplished without incurring potential financial, regulatory, or investigative costs of physical shipment

Additionally, due to the lack of technical expertise, traditional industry participants, such as art or auction houses or galleries, may not be able to conduct effective customer identification and verification.

According to a BBC report, the HMRC seized three NFTs worth $1.89 million in a suspected case of a tax probe. The HMRC is the first law enforcement body in the UK to make NFT seizures. Nick Sharp, deputy director of economic crime, said the first seizure of an NFT "serves as a warning to anyone who thinks they can use crypto assets to hide money from HMRC.”

The seizure forms part of a suspected VAT tax fraud case involving 250 fake shell companies. VAT tax is the tax applied to the purchase price of goods, services, and other taxable supplies that are bought and sold within the UK’s jurisdiction.

Three suspects have been arrested on the suspicion of attempting to defraud the HMRC. Basically, the suspects tried to claim back more VAT than what was owed to them. Further, the HMRC stated the suspects used various sophisticated methods to hide their identities such as false and stolen identities, false addresses, pre-paid unregistered mobile phones, Virtual Private Networks (VPNs), and false invoices.

Additionally, the HMRC stated that it has also obtained a court order to confiscate and detain crypto assets amounting to $6, 768 and three other digital artwork NFTs, which have not been valued yet.

How Can Merkle Science Help

To unlock the potential benefits of NFTs while mitigating the risks they pose to users, investors, and the financial system, the regulatory oversight over NFTs is increasing.  In order to protect themselves from exposure to the AML/CFT risks associated with NFTs, VASPs should proactively put compliance frameworks in place to monitor all transactions surrounding stablecoins and to mitigate AML/CFT risks.

Merkle Science provides a predictive crypto risk and intelligence platform, setting the standard for the next generation of financial safeguards and criminal detection. We are creating the infrastructure necessary so that a full range of individuals, entities, and services may transact safely with crypto. Merkle Science’s highly customizable platform and proprietary Behavioral Rule Engine is easy-to-use, allowing institutions to detect illicit activity beyond the blacklists and detect suspicious activity that could have previously been undetected.