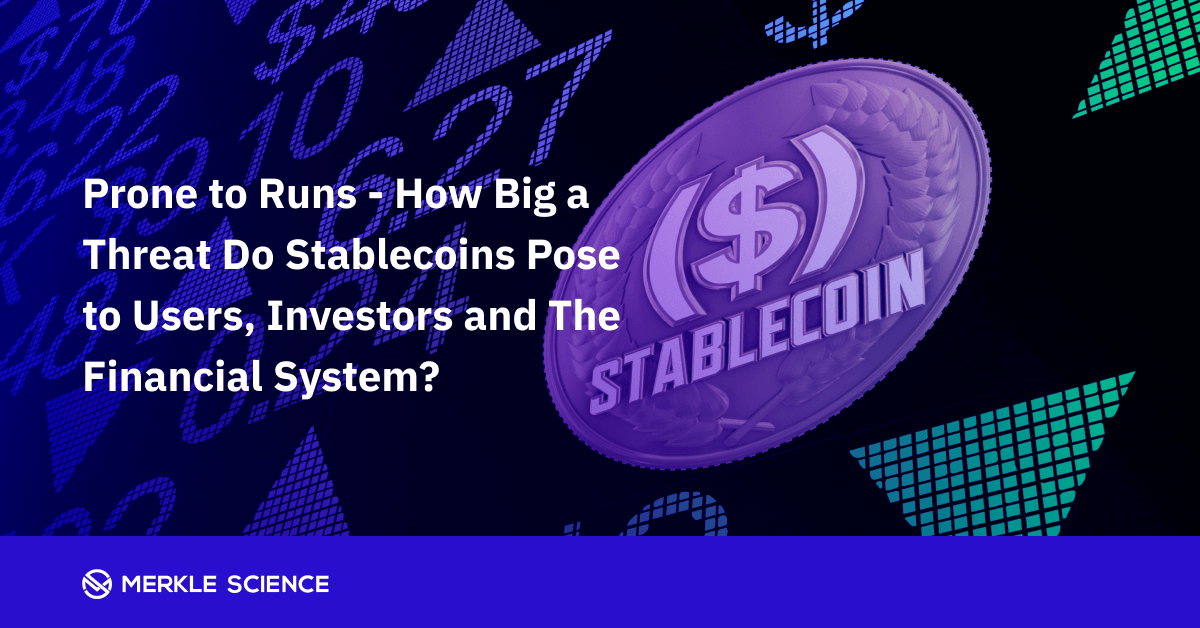 On May 9, 2022, the Federal Reserve released its semi-annual Financial Stability Report, which highlighted the run risks of stablecoins. The Federal Reserve asserted that rapid growth is one of the risk factors that make stablecoins more vulnerable to runs. According to the report, the aggregate value of stablecoins has increased rapidly over the past year, to more than $180 billion in March 2022. Amidst the rising use of stablecoins, the government agencies are concerned about the prudential risks associated with stablecoins including losing value or becoming illiquid in case of a market run.

The report's timing is notable, as TerraUSD (UST), one of the largest stablecoins by market supply and the largest algorithmic stablecoin overall, is struggling to maintain its peg against the US dollar amid a broad sell-off in crypto markets and global equities. According to reports, on May 9, 2022, the UST lost its dollar peg for the second time in three days, falling to as low as $0.65. It regained $0.90 on May 10, 2022, before slumping to lows of under $0.42 on May 11, 2022, and $0.6 on May 12, 2022.

U.S. Secretary of the Treasury Janet Yellen echoed The Federal Reserve’s concern over stablecoins. On May 10, 2022, in testimony before the Senate Banking Committee, she observed that “we see run risks, which could threaten financial stability, risks associated with a payment system and its integrity and risks associated with increased concentration if stablecoins are issued by firms that already have substantial market power.” In light of UST losing its peg, she further warned that “these risks are not hypothetical, they are playing out in real-time.” The U.S. Department of Treasury is soon set to release a comprehensive report on crypto and stablecoins.

This is not the first time that stablecoins have come under regulatory scrutiny. In December 2021, the U.S. States Senate Committee on Banking, Housing, and Urban Affairs held a hearing on stablecoins, in which it discussed the possible impact of stablecoins on financial stability. On November 1, 2021, the President’s Working Group (PWG) on Financial Markets released its highly-anticipated report on stablecoins. The PWG listed loss of value due to market runs as one of the major prudential risks associated with stablecoins. Further, following up on a hearing held by the U.S. House Committee on Financial Services, in February 2022, the U.S. Department of Treasury, in order to ensure investor protection and maintain financial stability, called for stablecoins to fall under the remit of federally issued depository institutions.

Stablecoins are Prone to Runs

The Federal Reserve stated that since stablecoins remain prone to runs, they also remain vulnerable to redemption risks. Stablecoins typically aim to be convertible, at par, to dollars, but they are backed by assets that may lose value or become illiquid during stress; hence, they face redemption risks similar to those of prime and tax-exempt money market funds. These vulnerabilities may be exacerbated by a lack of transparency regarding the riskiness and liquidity of assets backing stablecoins.

The mere prospect of a stablecoin not performing as expected could result in a run on that stablecoin, which may occur when many stablecoin holders try to liquidate their holdings, resulting in a “fire sale” of reserve assets. Fire sales of reserve assets are especially detrimental as they may lead to disruption of critical market functions, depending on the type and volume of reserve assets involved. The report warns that runs could rapidly and contagiously spread from one stablecoin to another.

The report also noted that the increasing use of stablecoins to meet margin requirements for levered trading in other cryptocurrencies may amplify volatility in demand for stablecoins and heighten redemption risks. Margin or leverage trading enables investors to use borrowed capital to make spot purchases and sales of cryptocurrencies.

How Can Merkle Science Help?

With financial stability concerns rising, U.S. lawmakers are planning to bring stablecoins within the regulatory fold. To protect themselves from exposure to the AML/CFT risks, crypto businesses should proactively put compliance frameworks in place to monitor all transactions surrounding stablecoins and mitigate AML/CFT risks.

Merkle Science provides the predictive crypto risk and intelligence platform, which sets the standard for the next generation of financial safeguards and criminal detection. We are creating the infrastructure necessary so that a full range of individuals, entities, and services may transact safely with crypto. Merkle Science’s highly customizable platform and proprietary Behavioral Rule Engine are easy-to-use, allowing institutions to detect illicit activity beyond the blacklists and identify suspicious activity that could have previously been undetected.