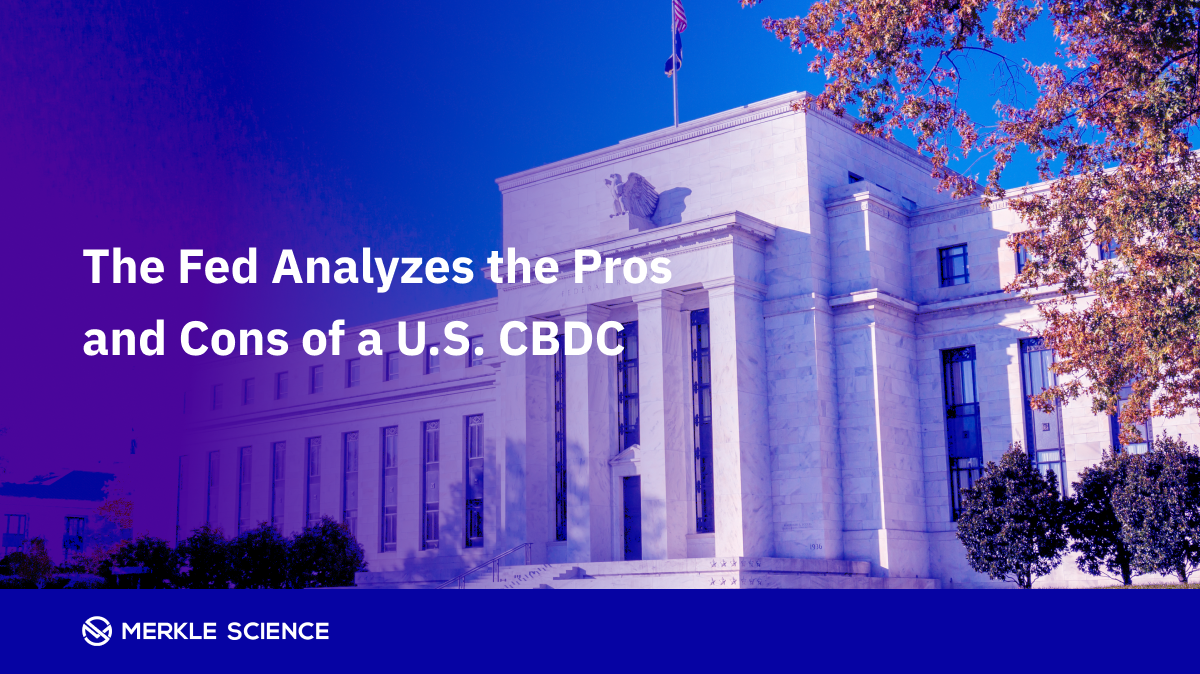 On January 20, 2022, the Board of Governors of the Federal Reserve System (Fed), released its long-awaited white paper on central bank digital currencies (CBDCs), titled — Money and Payments: The U.S. Dollar in the Age of Digital Transformation.

According to the white paper, the Fed’s initial analysis suggests that a potential U.S. CBDC, if one is created, will best serve the needs of the U.S. by being privacy-protected, intermediated, widely transferable, and identity-verified. The Fed is especially keen on taking an intermediated approach, it does not want consumers to set up personal accounts with the central bank to access CBDCs, instead, it would prefer existing commercial banks and payment institutions to facilitate the management of CBDCs.

Further, the paper examines the uses, functions, potential benefits, and risks of a CBDC. The Fed has requested comments from stakeholders on all aspects of CBDCs, including policy considerations and design. Though the official press release states that the paper does not favor any policy outcome, Chair of Federal Reserve, Jerome Powell, recently stated that “there is no rush in the U.S. releasing a digital dollar despite other countries, including China moving ahead with trials in different cities.”

Safely meet future needs and demands for payment services: According to the white paper, a U.S. CBDC will offer the general public broad access to digital money that is free from liquidity and credit risks. In addition, it will also help in mitigating risks arising from the proliferation of private digital money while supporting private sector innovation, leveling the playing field for smaller firms for whom the costs and risks of issuing their own digital currencies will be prohibitive.

Improvements to cross-border payments: A U.S. CBDC has the potential to streamline cross-border payments by using new technologies, introducing simplified distribution channels, and creating additional opportunities for cross-jurisdictional collaboration and interoperability. However, to achieve this goal international coordination is required to solve issues such as prevention of illicit transactions, legal framework, determining the types of intermediaries that would be able to access the new infrastructure, cost, and implementation issues.

Support the dollar’s international role: In addition to serving as the world’s reserve currency, the dollar is also the most widely used currency for payments, observed the Fed. The white paper states that the dollar’s global role hugely benefits the U.S by allowing it to influence the global monetary system standards.

However, the Fed reminds the regulators that it is important to consider implications of a potential future state in which many foreign countries introduced their own CBDCs — which could be more attractive than the dollar, therefore decreasing its use. In this situation, a U.S. CBDC would help preserve the international role of the dollar.

Extend public access to safe central bank money: Citing a 2020 consumer survey, the discussion paper states that cash remains an important and popular means of payment. Therefore, the Fed is committed to ensuring the continued safety and availability of cash and is considering a CBDC as a means to expand safe payment options, not to reduce or replace them.

Changes to financial-sector market structure: The report notes that a CBDC could fundamentally change the structure of the U.S. financial system, altering the roles and responsibilities of the private sector and the central bank. For example, an interest-bearing CBDC, can act as a perfect substitute for commercial bank money. This substitution effect can potentially reduce the aggregate amount of deposits in the banking system, which could in turn increase bank funding expenses, reduce credit availability, or raise credit costs for households and businesses.

An interest-bearing CBDC can also result in a shift away from other low-risk assets, such as shares in money market mutual funds, Treasury bills, and other short-term instruments, raising credit costs and reducing credit availability for businesses and the government.

Safety and stability of the financial system: The ability to quickly convert other forms of money into CBDC can make runs on the financial firms more likely or severe. Further, the Fed observed that, in such an event, traditional measures such as prudential supervision, government deposit insurance, or even central bank liquidity may prove to be insufficient to stave off large outflows of commercial bank deposits into CBDC.

Privacy, data protection, and the prevention of financial crimes: For an intermediated CBDC model, the Fed has to figure out how intermediaries can address privacy concerns by leveraging existing tools. Financial institutions have strict AML/CFT rules such as customer due diligence, recordkeeping, and reporting requirements. CBDCs will have the same robust compliance requirements as financial institutions and will have to be designed in a manner that facilitates compliance with these rules.

Operational resilience and cybersecurity: Threats to existing payment services — including operational disruptions and cybersecurity risks — would apply to a CBDC as well. Any dedicated infrastructure for a CBDC would need to be extremely resilient to such threats; however, designing appropriate defenses for CBDC could be particularly difficult because a CBDC network could potentially have more entry points than existing payment services.

The Fed has asked for public comment on 22 questions covering issues, such as a CBDC's impact on financial stability, questions about the anonymity of payments, defenses against cyberattacks on CBDC networks, financial inclusion, alternatives to a CBDC, and the Fed’s ability to set monetary policy. The Fed is opening up comments to the public for 120 days — until May 20, 2002.

How can Merkle Science help?

With the U.S, regulators increasing regulatory oversight over digital assets and prioritizing the prevention of financial crimes, crypto businesses should proactively put robust compliance frameworks in place. Merkle Science provides a predictive crypto risk and intelligence platform, setting the standard for the next generation of crypto threat detection, risk management, and compliance solutions. We are creating the infrastructure necessary so that a full range of entities including crypto businesses, insurers, and banks may transact safely with crypto.

Merkle Science’s highly customizable platform and proprietary Behavioral Rule Engine is easy-to-use, allowing institutions to detect illicit activity beyond the blacklists so that FIs may catch undetected suspicious activity that legacy providers might miss and better meet AML and KYC obligations as per guidance from jurisdictions around the world.